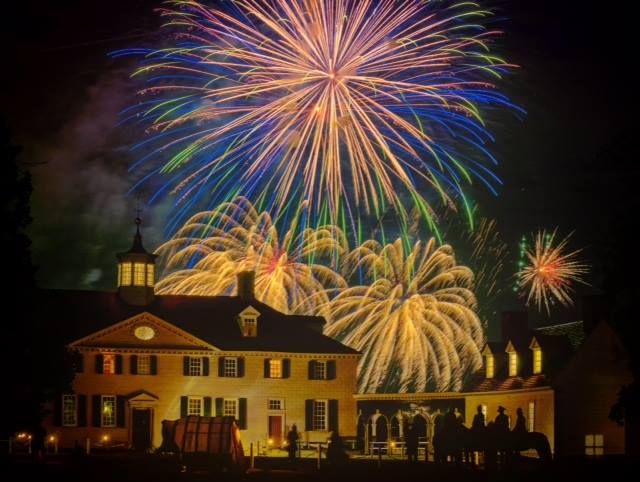 The Christmases of years past were simpler. Muted decorations, live evergreens, genuine hospitality, and serious reflection were hallmarks. One of the key destinations to witness these ideas put into practice is Colonial Williamsburg. People from near and far note every detail – from the wreaths to the tavern menus – for replication at home.

According to the late David DeSimone1 of Colonial Williamsburg, however, “Citrus fruits such as oranges, lemons, and limes would never have been wasted on any form of decoration. A pineapple was considered a precious commodity in the eighteenth century and would not have been used as a door or mantel centerpiece.”  Rather, greenery, herbs, and dried flowers were the Christmas norm in churches and homes. “Garlands of holly, ivy, mountain laurel, and mistletoe were hung from the church roof, the walls, and the church pillars and galleries. The pews and the pulpit, and sometimes the altar, were bedecked with garlands … Virginians decorated homes in the same way, but they most likely reserved one or two main rooms in the house for the Christmas observance,” wrote DeSimone.

Nevertheless, Colonial Williamsburg offers workshops to demonstrate how the decorations are created, and a walking tour to show them off. Whether it’s an accurate representation or not, we sure do love it, don’t we?

One thing that hasn’t changed is caroling. Sure, the tunes have caught up with the times, but many of the classics are still in our repertoire. “Joy to the World,” for example, dates to 1719. Join in the sing-along at Colonial Williamsburg select evenings at 6 p.m., then head to  Chowning’s Tavern for Brunswick stew or shepherd’s pie.

On the other end of Virginia is Thomas Jefferson’s Monticello, the homestead on the hill above Charlottesville. What a grand sight it is during the Christmas season, and even more spectacular when you experience it after dark. Evening tours are available on select dates before and after Christmas, but they are not suitable for children younger than six years old.

Gingerbread houses date to the 1600s and originated in Germany. Be inspired by Thomas Jefferson’s Monticello masterpiece and merge the Old World with the New World when you build a gingerbread house on select Saturdays and Sundays in December.

To the north is our first president’s home, George Washington’s Mount Vernon. Eighteenth century celebrations were often marked by “illuminations,” which could be the firing of guns and cannons or lighting fireworks. Experience such a celebration when you see the Christmas Illuminations December 18 and 19 at Mount Vernon.

Like Monticello, Mount Vernon will be hosting special evening and candlelight tours throughout the month. Either will be a special time to enjoy a near-authentic 18th century Christmas.